Honoring Home documents the life story of Han Lin, Burmese Freedom Fighter, political refugee and father of six. Han Lin and his family moved to America because of political persecution in Burma. Despite political refuge in America, Han Lin continued to raise awareness about the history and dire political situation in Burma. Now diagnosed with stage IV lung cancer, Han Lin attempts to take part in one last march for awareness from Albany, NY to UN in NYC.   Honoring Home is a testament to the power of freedom, sacrifice and love.
Watch here:
https://www.cultureunplugged.com/documentary/watch-online/play/54584/Honoring-Home
Posted by Jeffrey Hellman at 10/01/2019 No comments:


Honoring Home - tribute to U Han Lin from Jeffrey Hellman on Vimeo.

“[My] dream is to see my people in Burma have a peaceful life, to have happiness, and to be free.  Also to be a democratic country, to have basic human rights and to be a peaceful country.  I have this dream since I was young.”
-U Han Lin
Video tribute in memory of the late, Burmese Freedom Fighter, U Han Lin. 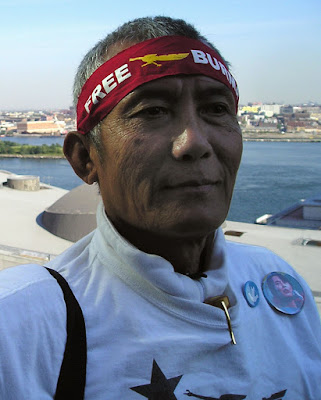 HAN LIN, teacher, husband, father, friend, and freedom fighter known worldwide for his passionate commitment to democracy and freedom in his native Burma, passed from this earth on Friday, September 26, 2008, five days past his 57th birthday, with his beloved family by his side.

Born in Palaw Town in southern Burma (which borders Thailand, Laos, India, Bangladesh, and China), Han Lin (Burmese don’t use first and last names; Han Lin is his full name) was the eldest of six children.

He was only eight when the young republic of Burma was overtaken in a coup. Ever since, the country has been under the control of brutal military regimes.

Han Lin taught middle school math and was a village leader, teaching about democracy and daringly speaking against the regime. He married Htay Htay Yee, also a teacher, in 1973. Their first five children were born in Burma—Ne Lin Tun, their eldest son, was born in 1975, second son Aung Phyo in 1977, daughter May Lin in 1981, son Tayza in 1983, and son Thuya in 1985.

Responding to pressure, the military regime staged an election in 1990; it lost in a landslide to Aung San Suu Kyi’s (and Han Lin’s) party. But the regime refused to allow Aung San Suu Kyi or her fellows to take office; she has been incarcerated for most of the years since, never allowed to take her rightful place as the country’s elected leader, despite winning a Nobel Peace Prize in 1991 and having millions of champions worldwide.

After 1988, Han Lin continued the fight for democracy, but faced constant threats. In 1990, to avoid being killed or imprisoned, he was forced to leave his wife and children, then ages 5 to 15. Through treacherous terrain he reached hiding in the jungle near Thailand, some 100 miles from his home.

Two years later, after constant worry and frequent harassment by military thugs, Htay Htay Yee and the children made their way to Han Lin and his fellow exiles.

The family lived in the jungle for six years. Htay Htay Yee gave birth to their sixth child, Thu Yein, now 16, there. In 1996 the family moved into a refugee camp in Thailand, where they stayed a year before coming to Ithaca in 1997.

In 1999 Han Lin began working as a facilities attendant at Ithaca College, where three of his children received their education (Thuya is a senior this year); son Aung still works there. Han Lin worked at IC until December 2006.

In 2004, 2005, and 2006 he led peaceful demonstrations in Washington, D.C., asking U.S. and world leaders to intervene in Burma. The campaigns included long marches to U.N. headquarters in New York, where he and his colleagues met with leaders and diplomats from many nations to negotiate for action on Burma, and staged hunger strikes to draw attention to Burma’s plight.

A wise, visionary, and famously determined leader, Han Lin was known throughout the exile Burmese communities in Asia, the United States, Europe, and the Pacific for his courage and unwavering dedication to helping his compatriots. He spent countless hours strategizing via teleconference and in person with other veteran leaders of the 8-8-88 Burmese people’s movement to stir the people and leaders of the world to do as Burmese democracy leader Aung San Suu Kyi asked: “Please use your freedom to promote ours.” 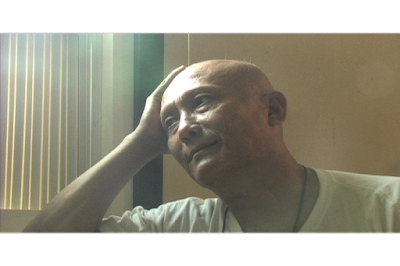 Han Lin was diagnosed with late-stage cancer in January 2007. Like everything, he faced it with bravery and strength. Although it ultimately defeated his body, it could not touch his indomitable spirit, which will live on in his comrades, friends, and mostly in his family, who meant the world to him.

Han Lin leaves his wife, Htay Htay Yee, their children, Ne Lin Tun of Indiana and Aung Phyo, May, Tayza, Thuya, and Thu Yein of Ithaca; his brother Min Aung of Amarillo, Texas, and three brothers and a sister in Burma; daughter-in-law Wai Wai, and many dear friends and fellow activists, including his student Jeffrey Hellman, who has been making a documentary about his life called Honoring Home, and Maura Stephens, his U.S. partner in ICFAB.

Friends suggest making donations to help the family. Checks can be made out to Htay Htay Yee and brought to calling hours or mailed c/o Maura Stephens, PO Box 403, Spencer, NY 14883.

The family invites friends, colleagues, and all who wish to pay respects to attend calling hours with Buddhist prayers from 12:30 to 2:30 p.m. on Sunday September 28 at Bangs Funeral Home, 209 W. Green St, Ithaca, New York (between Geneva and Albany Streets); 607-272-1922. Everyone is also invited to a celebration of Han Lin's life right afterword, from 3:00 to 5:00 p.m. at the Women's Community Building, corner of Cayuga and Seneca Streets.
Posted by Jeffrey Hellman at 9/27/2008 5 comments: